A Look at the History of Print 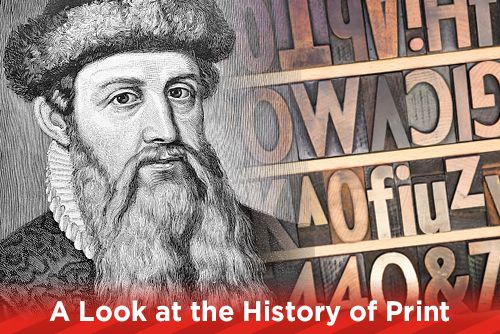 Printing has taken an amazing journey throughout the centuries, from simple drawings on cave walls to stencils and hieroglyphics to the present day process of offset and digital printing. Johannes Gutenberg, born circa 1395 and died February 3, 1468, probably never imaged how his invention would impact the world for centuries to come.

Since the invention of writing on cave walls, mankind has been trying to find something easier to write on other than stone. Credit to China for the invention of paper around 105 AD. It was made by mixing finely chopped mulberry bark, hemp rags and water, then pressing the water out and letting it dry in the sun. Over a short period of time, this paper was being used throughout China. In 650AD, a form of printing method called block printing was the beginning of multiple duplicates making it easier to for the Buddhist monks to mass produce prayers. Block printing used placing a piece of paper on top of carved wooden blocks and rubbing back and forth until the image is transferred. This method was the beginning of multiple duplicates to paper.

It was almost a century later before other European countries began making and using paper with advancements of making the paper absorb ink to prevent forgery. As time goes on, paper begins to become more popular and other ways of producing it differently from the traditional scroll used in China is introduced. Book form was created and so was the moveable type. The moveable type was used as early as 1000AD in China by carving characters into clay blocks and forming words. However, because of the many different Chinese characters, this didn’t really catch on. This form of printing was not introduced to Europe until the 1400’s. “By 1411 – nearly a millennium and a half after it was invented – people in Germany began to produce their own rag paper. Once they had learned to make paper, they became more interested in also learning about Chinese printing, and a man called Gutenberg produced the first printed Bible in 1453.” 1

Gutenberg was a skilled man. His original trade as a goldsmith gave him the ability to master manufacturing individual pieces of type. Each letter needed to be created as a master, then a mold had to be made in order to cast additional versions using a suitable type of metal. This was the basic foundation of a skillful printer, arranging the individual letters in an aligned and well-spaced form and level in order to receive the ink properly. The Gutenberg printing press developed from the technology of the screw-type wine presses of the Rhine Valley. It was there in 1440 that Johannes Gutenberg created his printing press, a hand press, in which ink was rolled over the raised surfaces of movable handset block letters held within a wooden form and the form was then pressed against a sheet of paper. 2

It is amazing how one man’s invention has changed the way we produce print and has impacted many along the way.