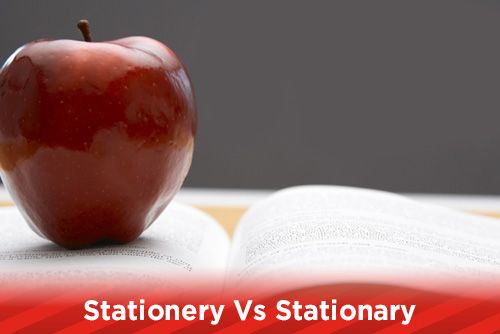 We’ve been guilty of this too. It’s so easy because they both sound the same. Thanks english language! Stupid homophones. It’s tough enough remembering “i” before “e” except after “c”! And don’t even get us started on capital vs capitol, that will have to be another post.

Back to the matter at hand though. Stationery vs Stationary. Which one is correct? Well, it depends on the subject.

Stationary, with an “a”, is an adjective and refers to an object that is not moving. You can ride a stationary bike or say that a building is stationary.

In printing, we deal with Stationery. With an “e.” Stationery is a mass noun, meaning that it can not be counted, it’s usually a noun that lacks a plural in ordinary usage. So you can order a piece of stationery, or a box of stationery, both instances are correct. One easy way to remember how to spell stationery is if you are buying papER, then you use stationERy.